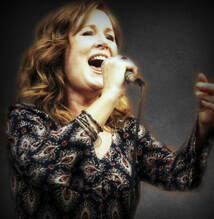 Lauri Jones is a Pacific Northwest based vocalist/songwriter, originally from the San Francisco Bay Area.  She has shared the stage with the likes of Patti LaBelle and George Benson, has sung back-up on recordings of such artists as Diana Ross, and had the great honor of singing with the legendary Boston Pops. Lauri is a multi-dimensional artist with a diverse background, having appeared in regional theaters (in a variety of musicals), jazz clubs, cabaret venues, spiritual centers, in pop and dance bands, and traveling the world on cruise ships. She holds a Masters in Musical Theatre from the Boston Conservatory.

Most recently, Lauri has been especially moved to write and perform music that uncovers and embraces a higher awareness and deeper spiritual truth of life's journey.  She celebrated her first release in that realm with the acclaimed “Walk Your Life” in 2015. The album features mostly originals as well as a deeply moving arrangement of John Lennon’s “Imagine” and a heart-thumping, bluesy rendition of Nina Simone's “Feelin’ Good”. The overall production (by Eric Montgomery and Lauri Jones) is rich and eclectic with a soulful pop vibe that shows Lauri's remarkable range and versatility.

Lauri's latest release, "Watch Love Rise", is a collection of mostly live performances (again co-produced by Eric and Lauri) that provide powerful inspiration for these particularly trying times laden with political and cultural divisiveness. Love, compassion,  spiritual activism, hope, and faith are all driving themes behind the songs, which Lauri delivers with a purity of emotion and genuine passion... her soul-stirring voice a clear channel of divine, "otherworldly" expression. In addition to her own compositions, the EP includes a choir-backed version of an obscure and brilliantly written Carole King gem from the 70's called "One" and a beautifully moving rendition of Sara Bareilles' "Love is Christmas". Also featured is a poignant ballad ("A Love That Never Ends") that touches on the physical fragility of life and the promise of eternal love, co-written and performed with inspirational recording artist Laura Berman. With the exception of that one, all songs were captured live by Rand Deahl at New Thought Center for Spiritual Living in Lake Oswego, Oregon.

Lauri has always been drawn to music about life's deeper journey. While performing on cruise ships and in cabaret venues, she created a one-woman show that told her "tears to triumph" story... from searching everywhere to realizing she was already "there"... celebrating the moment and all that is, inside and out. Her first album, "Have You Met Miss Jones", is a studio recording of the songs from that show... jazzy, soulful cabaret tunes ranging from Irving Berlin to James Taylor.

Lauri currently makes her home out in rural Battle Ground, Washington, with her partner and co-producer, Eric Montgomery, with whom she also has a piano/vocal/percussion duo called Montgomery Jones.